(Originally enlisted with the Derbyshire Yeomanry, 2713)

George Gregson was born in Longford, Derbyshire in 1888, the fifth child of Samuel and Grace (nee Bridges). He was baptised in Longford on 29 July 1888.

Over the next 20 years or so the family moved several times, living in Breadsall in 1891, Church Wilne in 1901 and by 1911 they were in Ambaston in the parish of Elvaston, where 22 year old George and his father were both working as farm labourers.

On 16 June 1915, George enlisted in the Derbyshire Yeomanry with his address given as Sutton Lane, Hatton. His medical inspection report showed that his height was 5ft 9in and his chest measurement 37ins. George remained in England until 20 September 1916, when he was sent to France with the British Expeditionary Force.

On 11 October 1916, in common with a number of other men from the Derbyshire Yeomanry, George was transferred to the 14th Bn., Durham Light Infantry.

On 06 March 1917, George was wounded in action with gunshot wounds to the right side of his neck and was taken to No. 33 Central Clearing Station. He was transferred back to England on hospital ship HS Dieppe and admitted to the Norwich and Norfolk Hospital on 15 March 1917. An operation was performed to try and remove the metal from his neck but George developed bronchitis and secondary haemorrhage and died on 06 May. The family were informed by telegram and George was buried in Marston on Dove churchyard a few days later.

George was awarded the British War Medal and the Victory Medal. 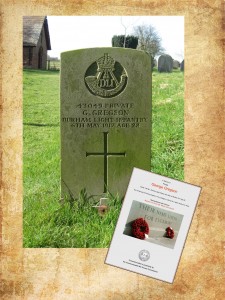