Alfred Gilbert was born into a large family in Tamworth in 1886, the son of blacksmith George Gilbert and his wife Ellen. It is thought that he remained in Tamworth until sometime around 1908, when he moved to Derby as a Police Constable. The census records of 1911 show him boarding at a house in Grayling Street, Derby, aged 25.

No service records have been found for Alfred although his medal card reveals that he originally enlisted as a Private before being promoted to Corporal. It also shows that the qualifying date for his medals was 21 August 1914, indicating  the date he entered a Theatre of War. A report of his death appeared in The Derby Daily Telegraph on 12 January 1915, stating that he had died on the battlefield. It also confirmed that he had been a Police Constable in Derby from 1908 and that he left behind a widow and child.

Alfred was the first man named on the memorial to die in the First World War, on 31 December 1914. His grave can be found at Le Touret Military Cemetery, Richebourg-L'avoue, France.

Alfred was awarded the British War Medal, the Victory Medal and the 1914 Star 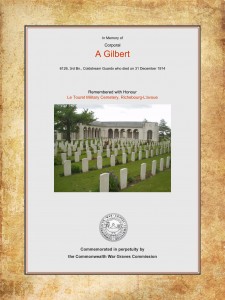