Charles Thomas Bailey was born in Thulston and baptised at St. Bartholomew's Church on 27 April 1879. His parents were Thomas and Caroline Bailey from Suffolk, who had moved to Thulston just before Charlie's birth. The family continued to live in the parish of Elvaston which is where Charlie spent his childhood and most of his adult life.

In 1901 Charlie was working at Elvaston Castle as a Groom and it is here that he met laundry maid Martha Hannah Stones who became his wife in 1905. Their son Charles Jack was born the following year but sadly Martha died shortly afterwards and Charlie was left to bring up his son with the help of his mother Caroline, who he was living with in 1911.

However, in 1913 Charlie married for a second time to Ida Eveline Knowles who had been a servant at the Rev. Prodger's home at Thurlestone Grange, Thulston. They moved to Bretby Park where Charlie continued to work as a Groom, and it was here that they had two further children, William Archie in 1914  and Ronald in 1916.

Charlie enlisted in the Sherwood Foresters on 11 December 1915.
His service records show that he was 5ft 51/2" tall and weighed 134lbs. He was initially allocated to the Army Reserve before being mobilised  and posted in August 1916. He remained in England until February 1917 when he was sent to France with the Expeditionary Force.

Charlie was wounded in action on 25 April 1917, with gunshot wounds to the legs, from which he died six days later. He is buried at Bray Military Cemetery, Bray-sur-Somme, France.

Charlie was awarded the British War Medal and the Victory Medal 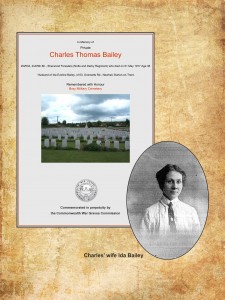