William Alfred Faulkner was born in Derby on 02 December 1899, the eldest son of Alfred Edward and Mary Anne (nee Booth). In 1901 the family lived at St Giles Road, Derby but by 1911 they had moved to Foleshill in Warwickshire and for an unknown reason were using the surname of Clare. Mary Anne had her last child Charles in 1912 but shortly afterwards she died at her parents' home in Derby, aged 39. William was just approaching his thirteenth birthday when his mother died.

The whereabouts of the family immediately after Mary Anne's death are unknown but in 1915, William enlisted in the 1st Bn., Worcestershire Regiment in Blandford, Dorset, using his mother's maiden name of Booth, presumably to conceal the fact that he was only 15 years old.

In June 1917 the Regiment were ordered forward to Ypres where they came under heavy bombardment. William was killed on the 29th July, two days before the official Battle of Ypres commenced. His military records are still held under the surname of Booth, although the Commonwealth War Graves Commission acknowledge both surnames.
William is remembered on the Ypres  (Menin Gate) Memorial.

The inclusion of William Faulkner on the Elvaston Memorial was at first unclear until  his family tree revealed that several members of his mother's family lived and worked in Elvaston. Also, a younger sister Molly later married at Elvaston church, confirming a link with the parish.

William was awarded the British War medal and the Victory medal. 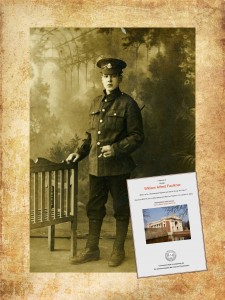