(Originally enlisted with the Derbyshire Yeomanry, 2010)

Jesse Miles Allchurch was born in Newcastle under Lyme in early 1891, the middle child of John and Eliza (nee Miles). His father died in 1898 when Jesse was only 7 years old but the family remained in Newcastle  as seen on the 1901 census. By 1911 however, when Jesse was 21 years old, he had moved away and was living at The Bothy, Elvaston Castle, where he was employed as a domestic gardener.

On 14 October 1914, Jesse signed up with the Derbyshire Yeomanry Reserve Regiment with the  service no. 2010. His details on enlistment gave his address as 11 Drayton Street, Newcastle under Lyme, his height as 5ft 6in tall and his chest measurement as 37in. He started out as a Private but was promoted to Lance Corporal in January 1915, Corporal in June 1915 and Sergeant by August 1915. After two years with the reserve regiment, Jesse was transferred to the 14th Battalion, Durham Light Infantry on 16 October 1916 as part of the British Expeditionary Force. Initially, on transfer, he had to revert to the rank of Private but promotion to Corporal and Lance Sergeant soon followed.

On 11 April 1917, Jesse sustained multiple gunshot wounds to his neck, back, abdomen and foot. He was moved to No. 33 Casualty Clearing Station but died from his wounds six days later. Amongst his personal effects was a wrist watch (broken), a gold ring and a coin which were sent to his widowed mother Eliza.

Jesse was awarded the British War Medal and the Victory Medal 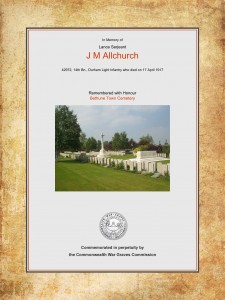