Frederick Waldron was born in Repton in 1889, the son of William and Emma ( nee Thorpe). In 1891, the family were living in Aston on Trent, but by 1901 had moved to Thulston, at which time twelve year old Frederick had already left  home and was working as an agricultural labourer at Moor Farm, Aston on Trent.

In 1907 at the age of 18, Frederick enlisted in the Sherwood Foresters. His description at enlistment reveals  that he was 5ft 51/4 " tall, weighed 140 lbs and had brown hair and blue eyes. By 1909 he was serving in Bangalore, Southern India and he probably remained there until just after the start of war as his service records show that in August 1914 he was treated for appendicitis at the station hospital in Secunderabad.
In November 1914 he was in hospital again, although this time it was in Boulogne, where he was treated for frostbite. Over the course of the next 12 months he was in hospital on at least two more occasions in both England and Malta.

On 28 December 1916, Frederick married Agnes Radford at St Bartholomew's Church, Elvaston. He was 28 years old and had recently been confirmed in the rank of Sergeant. Two months earlier, his younger sister Mabel had married Ellis Ashmore, making the two soldiers brothers in law. Ellis is also remembered on the  Elvaston Memorial.

Frederick was killed in action on 27 September 1917 and is remembered on the Tyne Cot Memorial to the Missing in Belgium.

Frederick was awarded the British War Medal and the Victory Medal 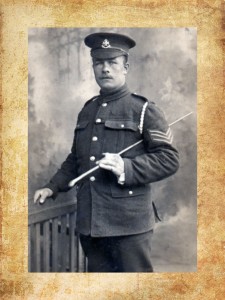