Talbot Fitzroy Eden Stanhope was born at Whitefield House, Uldale, Cumberland on the 23 November 1896. He was the second son of the Hon. Dudley Henry Eden Stanhope and the Hon. Kathleen Stanhope (nee Wood) who later became 9th Earl and Countess of Harrington.

Stanhope was educated at Oakham School, Rutland and at the R.M.C., Sandhurst, for which he gained a King's Cadetship. He passed out of Sandhurst in July 1914 and from there proceeded to Minster, Isle of Sheppey, receiving his commission in the 5th Bn. Rifle Brigade in October of that year. In March 1915 he was one of several officers posted to the 2nd Rifle Brigade, following the Battle of Neuve Chapelle.

On the 3 May 1915, Major Talbot, Commanding Officer of the 5th Bn. Rifle Brigade, wrote a letter recommending the young Stanhope for promotion to Lieutenant.

Most of the men killed that day, including Stanhope, have no known grave and are commemorated on the Ploesgsteert Memorial to the Missing. Stanhope is  also remembered on the Copythorne Memorial in the New Forest and on the Chapel Memorial at Oakham School. In addition, his name appears on a more personal memorial at Fromelles , close to where he fell. This memorial was dedicated to his Captain, Paul A. Kennedy, fellow officers and men from the 2nd Rifles who also lost their lives that day. The memorial was commissioned by Kennedy's mother after unsuccessful attempts were made to find her son's grave.

Stanhope was awarded the British War medal, the Victory Medal and the 1915 Star 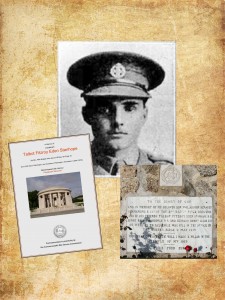