Ellis Ashmore was born in Duffield in 1894, the eighth of eleven children born to John and Lois (nee Seal). He spent his early life living and working in Duffield, as seen in the 1911 census records, when 16 year old Ellis was living in Tamworth Street and  working as a labourer at the cotton mill.

On 03 December 1915, Ellis enlisted with the 2nd/5th Sherwood Foresters in the rank of Private. His attestation papers show that on enlistment he was 21 years and 3 months old and was 5ft 4" tall.
Ellis remained in England throughout the whole of 1916 and it was during this time that he married Mabel Waldron from Thulston, at St. Bartholomew's Church, Elvaston on the 07 October, 1916. Mabel was the younger sister of Frederick Waldron who is also remembered on the Elvaston Memorial.

In February 1917, Ellis was finally sent to France but only three months later in May he was killed in action. His daughter Nancy was born just eleven days before his death. Mabel had given birth then lost both her husband and brother all within six months of each other.

Ellis Ashmore's grave is at  the Templeux-le Guerard Communal Cemetery Extension in France and he is also remembered on the Duffield War Memorial at St Alkmund's Church.

Ellis was awarded the British War Medal and the Victory Medal 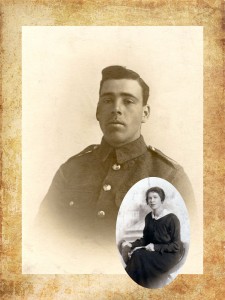