Archibald Plant was born in Hollington, Derbyshire on 10 March 1891, the third of ten children of Smith and Sarah Ann (nee Yates).
In 1900, when Archie was 9 years old, his mother Sarah died aged 37.
A year later when the 1901 census took place, the family had moved to Coldbath Road, Billesley, although at the time of the census Archie was not at home but a visitor at Prestwood Farm, Kedleston. In 1911, 20 year old Archie was back at the family home in Billesley working as a butcher's carter.

It is not known when Archie volunteered as no service records have been found. Finding any records at all were difficult until it was discovered that he was recorded under Arthur instead of Archie. His medal card shows that he entered a theatre of war in France on 22 March 1915 and that his death  took place on 01 July 1916. This date was notable as the first day of the Battle of the Somme, a day which saw 57,470 British casualties, of which almost 20,000 died.

The Birmingham Gazette reported the news of Archie's death, in which it said that he was killed in action in the "big push". The report also revealed that he was employed as a tram conductor prior to enlistment and that three of his brothers, Smith, Will and George were also serving in the army.

Initially it wasn't clear how Archie was connected to the parish of Elvaston until a search of his family tree revealed that his sister Frances was married to farmer Phillip Smith and lived in Ambaston. His older brother Harry also lived in the parish, clearly establishing a connection, although it is not known if Archie himself ever lived here.

Archie was awarded the British War Medal, the Victory Medal and the 1915 Star 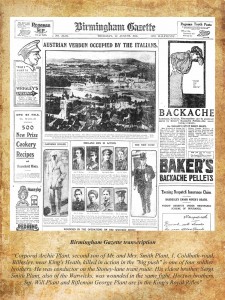