William Mould was born in Oakham, Rutland, on 17 August 1892, the eldest child of Amos and Mary Ann (nee Smith). His early life was spent in Leicestershire, but at sometime before 1908 the family moved to Elvaston, where William's father was employed as motor mechanic and chauffeur to the Earl of Harrington.

In 1910 on his 18th birthday, William enlisted in the Royal Navy, signing up for twelve years. His naval records show that he was
5ft 51/2" tall, with brown hair and blue eyes. In April 1911 when the census took place, William was already at sea in the Mediterranean, serving as an Ordinary Seaman. The Navy Register which details his  record shows that he served on a number of ships and that his service was continuous throughout the war and afterwards, achieving the rating of Petty Officer in March 1917.

In January 1921, William was serving on HM Submarine K5 which had been taking part in Atlantic Fleet exercises off the Scilly Isles. The K5 disappeared in what was believed to be a diving accident. She had signalled that she was about to dive but did not surface at the end of the exercise. All  57 hands on board were lost and no bodies were recovered from the tragedy. The names of the lost crew, including that of William, appears on the Naval Memorial at Portsmouth

William left behind a widow Amy, who he had married in 1919 and baby daughter  Betty, born in the year of his death, 1921.

He was awarded the British War Medal, the Victory Medal and the Star 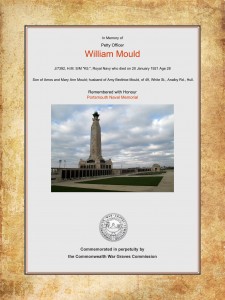 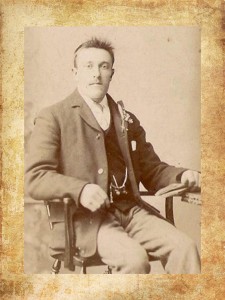