Richard Lomas Hart was born in Elvaston in 1895 and baptised  in Turnditch on 25 August of the same year. His parents were George Hart from Bedfordshire and Mary Ann (nee Lomas) from Brassington.

In 1901, the Hart family and their seven children were living in Elvaston and it was about this time that Richard, otherwise known as Dick, became a childhood friend of Charley Garratt, who later recalled episodes of boyhood mischief with his friend in his account "Charley's Tale, The Story of an Elvaston Lad".

In 1911, sixteen year old Richard was recorded on a ships passenger list arriving at an Eastern port in the United States. Canadian records show that the family initially arrived at Lorlie, Saskatchewan but that subsequently they "homesteaded" northeast of Gladmar.

Richard enlisted in the Canadian Army in late 1915, with the likelihood that he was sent  to the south of England for training before being sent to France. The dates of his movements are not known, but on the morning of 05 July 1917, he was on duty in a gun pit involved in enemy shelling near Lens in France. The casualty records show that a shell struck the edge of the pit, severely wounding him and causing ammunition in the pit to explode, causing further injuries from burns. Richard received first aid and was taken to the Canadian Field Ambulance but died the same day. 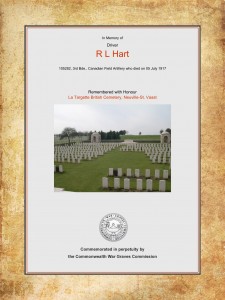 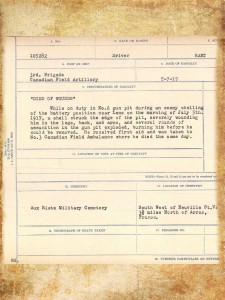