John Gregory Chambers was born in Breedon on the Hill in 1874, the eldest of ten children of John and Clara (nee Gregory). He was baptised at St Bartholomew's Church, Elvaston on 31 May 1874, Elvaston being the birthplace of his father John and grandfather Thomas, who was a saddler and farmer.

Census records show that John and his family moved frequently and could be found living in different places at each census: Griffydam, Leicestershire in 1881; Oxford Street, Alvaston in 1891; Storer Road, Loughborough in 1901 and Taylor Street, Osmaston in 1911.

No service records have been found for John but an account on the Loughborough Roll of Honour states that he was injured in France with a bullet wound  to the head and was then transferred to a hospital in Grantham for treatment. He later died at the hospital and was buried nearby at Londonthorpe, Grantham (St. John the Baptist) Churchyard. Two other brothers also died in the war, Quarter Master Sergeant Peter Gregory Chambers ( Royal Scots Fusiliers ) of Loughborough and Private Thomas Gregory Chambers ( Northumberland Fusiliers ) of Eastwood, Notts.

John's inclusion on the Elvaston Memorial is thought to be due to his baptism at St. Bartholomew's and his family history connections with the parish which go back several generations. At the age of 42, John was the oldest person named on the memorial.

John  was awarded the British War Medal and the Victory Medal 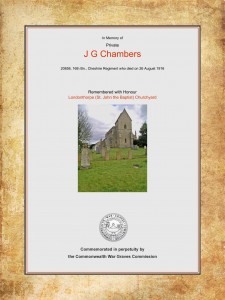