John Billings was born in Thulston in 1893, the only son of John and Hannah Billings and brother to Elizabeth. The family were recorded as living in Thulston in both the 1901 and 1911 census. In the 1911 census, 17 year old John could be found working  as a farm labourer, while his father was employed as a gardener labourer.

The details of his enlistment are not known but the limited records that are available state that it took place in Dublin. John's Medal Rolls Index card states that he first entered  a theatre of war in France on 17 October 1915 . Although his movements after this date have not been traced, the date that he died in 1918, places his regiment in the Second Battle of the Somme, which took place between 21 March 1918 and 06 August 1918. The Pozieres Memorial, on which John is commemorated, is located in the Somme department of France. The memorial lists the names of 14,692  soldiers with no known graves who were killed between those dates.

John was awarded the Victory Medal, the British War Medal and the 1914-15 Star 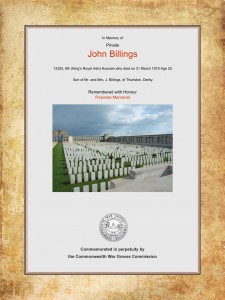